We continue to monitor the situation...

We are running all our youth theatres back as normal and will continue to monitor the guidelines on a regular basis and follow them dilligently. Our priority remains the health and wellbeing of all our students and staff.

A short video of us delivering the plays to our students for our online play club.

Our Work during lockdown 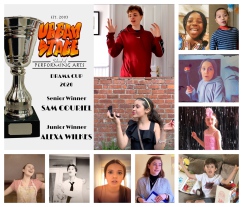 As with all businesses Urban Stage was hit hard by the lockdown due to the global pandemic. As an organisation that works primarily with young people, in a medium where working with each other in close proximity is standard procedure, we were always going to find it difficult to continue our work in the usual manner. However, we were determined that our students would not be left without an outlet for their creativity during this difficult time, and so we embarked on finding a way to make Urban Stage run virtually throughout the last term. We were also forced to postpone several productions that had been planned for this term so we had to come up with an alternative program of work for the students. At our north manchester branch we decided to bring forward our Drama Cup by a year and we tasked the students to work on a choice of one or more pieces from the following categories, Poem/Spoken Word, Monologue or Song. Each student was assigned a mentor from our pool of staff members and given 1 session each per week over the last 12 weeks to work on their pieces. We then asked them to film the finshed product which we compiled, and sent out to all the families and friends of Urban Stage to vote on. The finalists videos from each category were then sent to several industy professionals including our patron Imelda Staunton CBE, members of the cast and company of Wicked in the West End as well as other actors, directors and others from the entertainment industry, to vote for the overall winners. This whole process concluded with an online ceremony on Sunday 19th July in which the winners were announced.

On top of this we also managed to run our ususal group sessions with the students online, which meant students still got to see and work with their friends and peers on a regular basis. We are so proud of what our students achieved during this time and can't wait to get back to some sort of normaility and working with them face to face in the coming months.